Not aware of any on-field problems cricket has with racism. Shaking the other bloke's hand and wishing him good luck is hard to go past as a simple show of equality without any outside connotations. But if QdK is happy to kneel before every match we can move on.
Last edited: Oct 29, 2021
Reactions: 1 user

Chasing 155 to win. Outstanding performance by Zampa. Not sure we have it in us.

Easiest of wins with overs to spare. Keeper fumbling a sitter off Warner helped.
Reactions: 1 user

I can have my cake and eat it too

Just had a look at the highlights. Good to see a decent opening partnership. Great result.
P

tigertim said:
I think it's a bit heavy handed personally. Players aren't told to show respect to their country's national anthem in a specific way, why should they be instructed to show their respect for BLM in a specific way?

And a raised fist is the sign of Black Power, isn't it "cultural misappropriation" for white people to do it?
Click to expand...

This is where contemporary social justice political movements are not even 'like' a religion anymore. They have BECOME a religion in all but name only.

In this context, QDC's mistake is going about his commitment to racial equality with humility and humbleness in his every day life. He doesn't expect kudos and recognition for it, he just does it. Once admirable qualities. But in a world obsessed with narcissistic attention seeking and a grotesque contest of moral exhibitionism - a phenomenon driven by social media which essentially exists with grotesque exhibitionism and attention seeking being it's central raison d'etre - people like QDC who quietly exercise their beliefs in their every day dealings and interactions are sadly called into question. And worse, essentially assumed a non-believer (in this instance, a racist) because they don't express it in an inflexibly prescribed way.

As to your point on cultural appropriation. Well this is one of the many examples of contemporary social justice politics being riddled with so many cleverly crafted double standards, designed to put people in a no-win, check mate situation, where they have no choice but to admit their irredeemable original sin (in this case, being born white) and bow down and lay themselves at the mercy of the unelected social justice clerisy. As in, on the one hand you must embrace multi-culturalism, multi-racialism, multi-ethnicism by overtly celebrating it at every moment of every day, but don't embrace it too much, because that is cultural appropriation. The inference of course being that part of your original sin of being born white European is that you actually have no culture, every part of what you think is your culture has been appropriated (stolen) from some other group.

As others have said though, probably best for another thread as this is more politics and philosophy related, rather than specifically cricket related.
Last edited: Oct 30, 2021
Reactions: 3 users

tigertim said:
And a raised fist is the sign of Black Power, isn't it "cultural misappropriation" for white people to do it?
Click to expand...

Definitely harks back to the ‘68 Olympics and the Black Power salute showing solidarity with the Black Panthers, a militant activist group in the habit of displaying firearms in public.

From what I can gather, the Michael Holding version of taking a knee definitely implies support for the broader Black Lives Matter movement.

I noted the initial statement from CSA on de Kock mentioned BLM and a later, almost identical one had the reference removed. Cricket would do well to distance itself from BLM and promote the gesture alone. There is no need whatsoever for the sport to associate itself with BLM.
Reactions: 1 user

Once again Militant Mikey cannot desist from bringing BLM into it.

Newsflash, Mike: Many people do not believe in the movement.

Someone needs to ask whether he's on the payroll. Cricket needs him to STFU about BLM.
Last edited: Oct 30, 2021
Reactions: 1 user

tigertim said:
I think it's a bit heavy handed personally. Players aren't told to show respect to their country's national anthem in a specific way, why should they be instructed to show their respect for BLM in a specific way?

And a raised fist is the sign of Black Power, isn't it "cultural misappropriation" for white people to do it?
Click to expand...

I read an interview with Norman where he said that was the reason he bowed his head, rather than raise his fist to show his support of their actions. The raised fist was their thing and him to mimic it would have been disrespectful.
Reactions: 1 users

CarnTheTiges said:
The raised fist was their thing and him to mimic it would have been disrespectful.
Click to expand...

The fist - in particular the black gloved fist - is specifically a show of support for black militant groups.

Paul Kent does a reasonable job of addressing the subject in the absence of any cricket journalist being willing to do so.

He points out the distinction between the BLM movement and the BLM organisation, but I don't think it's reasonable or practical to expect the public to distinguish between them.

Images like the one below of the West Indies team executing the "Black Power" salute complete with black gloves further muddy the waters and strengthen the perception that the Michael Holding vision aligns with the militants. 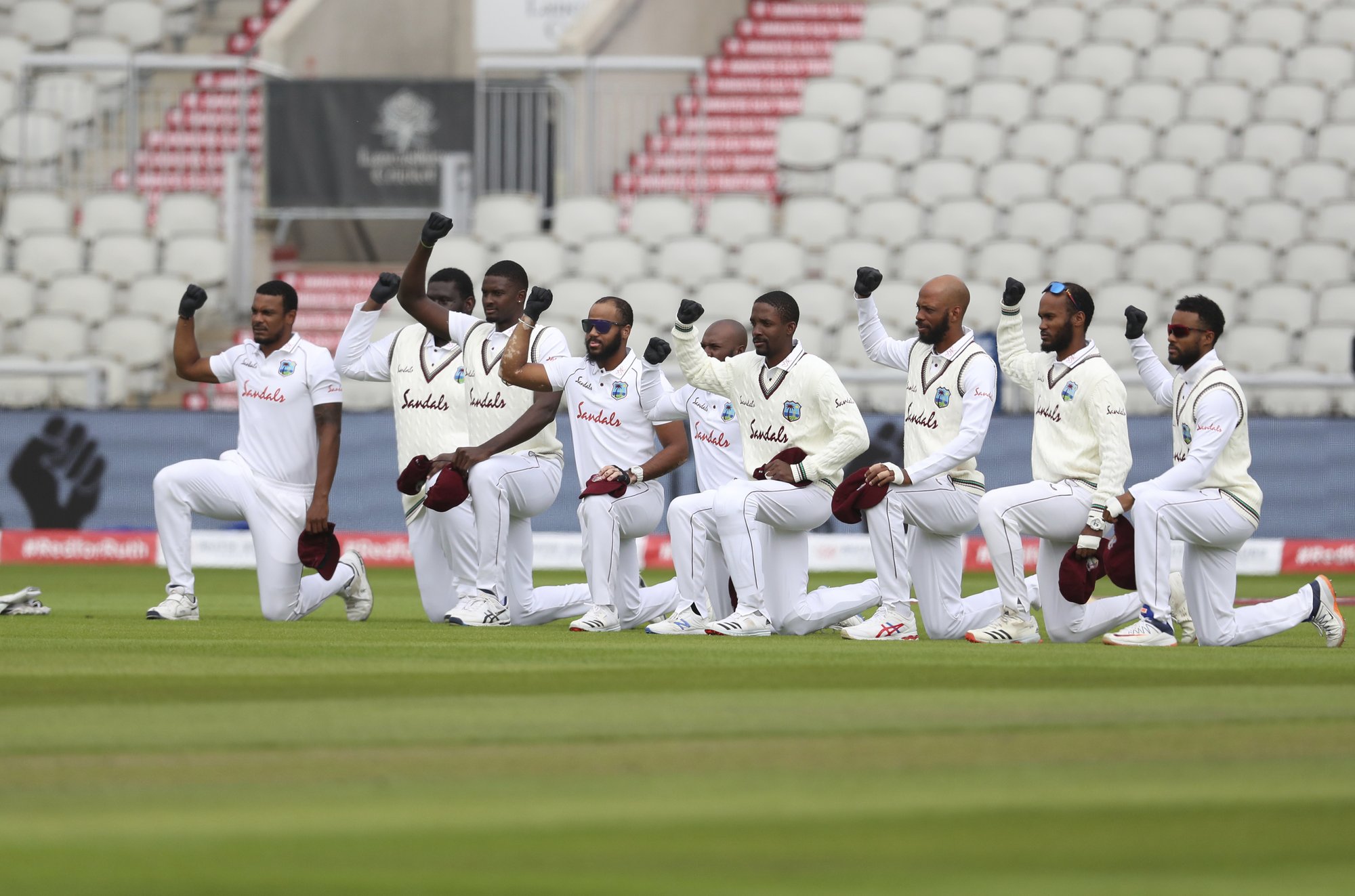 Cricket has a BLM problem. The ICC should issue a directive that BLM is not to be mentioned by governing bodies, and instead promote "taking a knee" as the universal symbol of solidarity against racism. No need to mention BLM and confuse people or get them off side.
Reactions: 1 users

Australia being blown away by England, 3-15, in the 5th over.
Reactions: 1 user
T

marella jube said:
Australia being blown away by England, 3-15, in the 5th over.
Click to expand...

Need to get Inglis into the side.

This is an arrogant pantsing. Think the Poms are intent on knocking us out of the top two on run rate.

Aussies thrashed. We really can’t play a true T20. We play them as mini one dayers.
Reactions: 1 user

Hopefully we get knocked out early and they can come home and get in an extra game of proper cricket.
Reactions: 2 users

spook said:
Hopefully we get knocked out early and they can come home and get in an extra game of proper cricket.
Click to expand...

Can't hurt since the Ashes is the big prize.
Reactions: 1 user
M