How will they know who to select? No draft bolters or sliders. It will be a lottery rather than an inaccurate science.

Could be outstanding opportunity TD , in saying that I’d say luck will play a bigger role then ever before, could be a great year to take a bit of a punt on a kid who’s grown a bit during the season without paying. Poor old Shifter is going to be goin nuts on Draft night not knowing the names of all the bolsters
Reactions: 1 user

I think we'll be more likely to see the smokeys in the 2022 draft.

its the 2004 born lads that will go off the radar for a bit.

There will be silver linings if you know where to look

At least the tigers have seen Rioli jnr play this year

Clubs like us with huge resources will have a massive advantage due to tracking lots of kids from younger ages.
Reactions: 1 users
T

these players should play next year, and i doubt there will be a draft this year especially with all the cost cutting and most of the recruiters being let go. The cost are huge for under developed men.

go polo said:
these players should play next year, and i doubt there will be a draft this year especially with all the cost cutting and most of the recruiters being let go. The cost are huge for under developed men.
Click to expand...

How will they decide draft order? Assuming there’s no season (which I am)

Still a bit early to tell if a draft would go on , if we can manage to put some kind of season together then you’d expect there would be , if none then I reckon they’ll pass

TigerPort said:
The AFL could take the opportunity to lift the draft age by 12 months
Click to expand...

Yeah, I can see that happening. A lot of the changes the AFL has wanted to make will come out next season.

Clubs will be forced to select players virtually sight unseen at this year's national draft with AFL CEO Gillon McLachlan conceding he is not optimistic that community football or elite underage competitions will resume this season.
He said he was confident a national draft would occur but when it would be held and whether its format would stay the same remained as uncertain as most other aspects of the game in 2020.
McLachlan said that recruiters would need to "rely on past form and what the guys did in their second last year" in 2019 when selecting players to add to their list for 2021 and beyond. 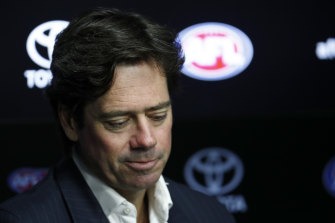 Gillon McLachlan.Credit:Getty Images
"What I am confident about is that there will be a draft and there will be a lot of unexposed form and it will throw its own challenges and opportunities," McLachlan told Fox Footy.

Recruiters and list managers have been stood down temporarily at all clubs and there is an expectation that their ranks will be thinner when the game resumes, with the reduction in the soft cap forcing clubs to find cost savings throughout football departments.
However, there are huge number of issues list management teams will need to work through with the 50 per cent pay cut agreed to by players - that sources confirmed is across the board - even if the season does resume one of the more certain components of the space.
Clubs are unsure whether a new collective bargaining will be negotiated that reduces total player payments, which was set to be $13,013,257 million per club in 2020 and rising two per cent per annum until the broadcasting agreement expired in 2022.
They are also uncertain as to how existing contracts might be treated as a result of the economic calamity hitting football and whether long-term contracts might be renegotiated.
They were furiously working this week to develop new strategies if list sizes are reduced.

Sources said that a future CBA would take into account the disproportionate impact the 50 per cent cut would have on players such as Carlton's Jack Martin, who was set to earn $1 million in 2020 in a heavily front-ended five year deal, although it was uncertain exactly how the discrepancies would be addressed. Players have already received five months of their year's earnings.
Added to that is the need to identify underage talent without seeing them play in 2020 as well as the complications that were expected to arise at this year's national draft with a high number of father-son prospects and next generation academy graduates in the pool.
One experienced club recruiter said they were well placed to assess the form of players eligible for the draft for the first time this season.
"It would be obviously be more difficult but the work we have done in 2019 sets us up," the recruiter said.

He also said if list sizes were reduced clubs with experienced players coming out of contract at the end of 2020 would be in a good position to quickly adapt and potentially grab players from other clubs who might be delisted.
McLachlan indicated there were no definitive plans around how future pathways would be structured but he hinted that he suspected clubs might look at drafting more state league prospects at the end of the season because their form was more predictable.
McLachlan confirmed the AFL would do what it needed to do to get the remaining 144 games played when medical experts convinced them they were safe to resume without endangering the community or players.
"As long as it's appropriate in that context, we'll do what we need to do," McLachlan said.
AFLPA CEO Paul Marsh, who struck the pay deal with the AFL late on Friday, said the players were prepared to do what was required within reason to complete the games but they would not expose them to risks of long-term injury in doing so.

Marsh said there were contingencies being put in place to help players on low earnings with a hardship fund of $500,000 established as part of the new agreement. AFL CEO Gillon McLachlan guarantees a national draft will occur but the shape of it remains to be seen.

Wouldn’t want to be a struggling club right now.

The climb back up is so much harder.
Reactions: 1 user

Like the AFL boys I recon the clubs will get a good idea of whos a serious kid to pick up when everything settles down. The ones that come back in good shape and skills are sharp are the ones that have been doing the work by themselves. That and they'll already have an idea of the kids from last year, It's maybe the kids in the U/16s that will be more of a lottery.

I don’t imagine this will be as bigger problem as most think, I’m more concerned that academy could be abandoned

Bonus then that Maurice jnr was playing finals in the Territory while most draft prospects were just enjoying their summer vacation.

players in the elite pathways are still expected to be training and recording it, so the higher end talent in the national academy programs will still be monitored. Compliance is a huge thing that teams look at, so teams will definitely note if players arent doing these things
Reactions: 1 user
T

D85 said:
players in the elite pathways are still expected to be training and recording it, so the higher end talent in the national academy programs will still be monitored. Compliance is a huge thing that teams look at, so teams will definitely note if players arent doing these things
Click to expand...

thanks D.
So the top 40 will be ok, as they were already on the radar and adapted to the elite system.
But its the draft smokeys, grew a lot in the final year, talented but not yet settled that will not get a chance to fly up the order. Right?
So we would likely see a very short draft with minimal wild selections?
Show hidden low quality content
You must log in or register to reply here.
< Richmond Academy zone prospect | Cat B rookies >
Share:
Facebook Twitter Reddit Pinterest Tumblr WhatsApp Email Share Link
Top Bottom