Some of the most eye-catching players in Richmond’s first intra-club match of the year didn’t play in last year's premiership.
Desperate to break into the reigning premiership side, Sydney Stack, Noah Balta, Jack Higgins, Riley Collier-Dawkins and Mabior Chol were the ones who worked harder and did more to present themselves than most.

The surfeit of Richmond small forwards has the pressure elevated for places in the team. Stack, who could play anywhere on the ground, was clean and clever, and Daniel Rioli took the best mark of the day.

Balta shifted to defence late last season and has trained there over the summer. He was as impressive as anyone on the field.

But it was Shai Bolton who caught the eye more than any other player on Punt Road Oval on Thursday morning. That is, any player other than Dustin Martin, who always demands the ball and your attention.

Bolton was electric in the first half. He kicked the first goal in the opening 30 seconds of the match that pitted the nominal best Richmond 22 against the hopefuls. Bolton was in the best 22. He will stay there.

“The guys who didn’t play in the grand final, a lot of them played really well. Noah was one who is looking for an opportunity, he played in our best defence today and was one of our best players,” assistant coach Justin Leppitsch said.

“It’s a real challenge for us how you fit them in, how many mids, how many forwards. It is going to be difficult for us at the moment.”

Collier-Dawkins, playing on the ball or out on a wing, will force his way into the team.

Marlion Pickett’s stunning debut in the grand final appears only to have intensified his motivation. He has returned fitter and leaner – not that there was a lot of him last year – but he is sharp.

“Yeah, he is leaner,” Leppitsch said. “It’s his first AFL pre-season. Even at 27 years of age the improvement you can get just by being in an AFL system … he does look good, he looks sharp, still blind-turning everyone which was good to see.”

Toby Nankervis coming back from injury played in the B team for a quarter then ran laps. He is very good when out there but it still leaves the most vexing of selection questions unanswered - who plays in the ruck?

Ivan Soldo started up forward but was good when moved into the ruck, Chol was excellent around the ground. And Callum Coleman-Jones did some good things.

"We still talk about it every day, who is our best ruckman and best ruck combination?" Leppitsch said. "It's going to be a real challenge."

Bachar Houli sat out the last quarter after being heavily brought to ground in the third quarter and got up winded and rubbing his shoulder. 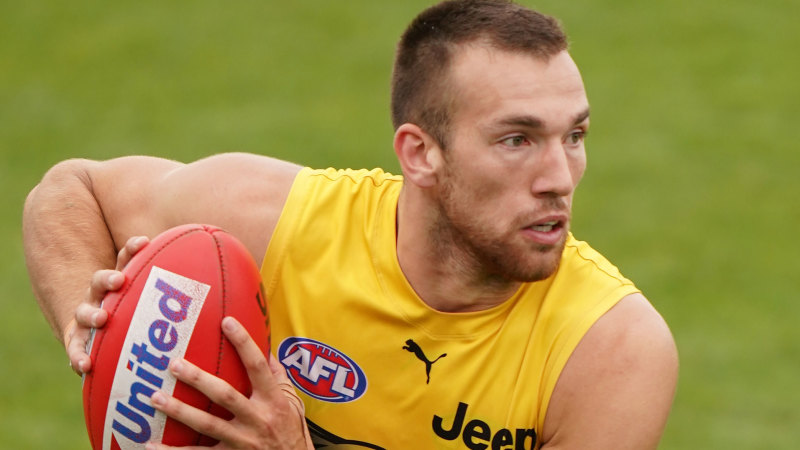 Tiger hopefuls show the hunger to break into Richmond team

Some of the most eye-catching players in Richmond’s first intra-club match of the year didn’t play in last year's premiership.

yeah only "some" good things, everything outside of that well... you don't want to know lol
Show hidden low quality content
You must log in or register to reply here.
< Channel Seven to air Ben Cousins documentary (Herald Sun) | If you think the Tigers or Dees are close to a flag, you're dreaming-Herald Sun >
Share:
Facebook Twitter Reddit Pinterest Tumblr WhatsApp Email Link
Top Bottom